Mar 11, 2019
Loading...
USNMix Report: On going to the office of bicycle in this country,
you get 16 rupees for every kilometer.
Cycling is great for health. In this way, cycling in the Netherlands gives two benefits.
Cycling is being adopted very fast in the big cities of the country and the world. There are many reasons behind this. Cycling is very beneficial for health. It is difficult to take care of your health in the life of Bhagam Bhag. In such a situation, if you use bicycles to go to some places instead of a car, then it will be beneficial. Apart from this, using bicycle lets you avoid traffic problems as well as save the cost of petrol and diesel.
But, you know that there is a country in the world which also gives money in exchange for cycling. Netherlands is a country where you get money from the company when you go to the office by bicycle. 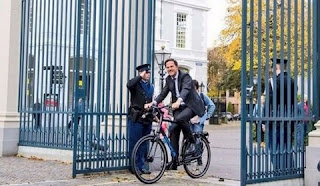 This has been done to boost cycling in the Netherlands. This is the reason why there is more cycles than the population here. If an employee uses a bicycle to go to the office in the Netherlands, then he gets 0.22 dollars (about 16 rupees) for each kilometer separately. The government there has given strict instructions to companies that they follow this rule.
Like the Netherlands, there are many countries in Europe where ‘bicycle to work scheme’ is applicable. If you use the bicycle to go to the office, you get money in exchange for every kilometer. You will see a large number of people riding bicycles on the streets of England, Belgium. If you go to buy bicycles in many countries of Europe, you are given a huge discount in tax. With the promotion of cycling, the dependence of these countries is decreasing on petrol and diesel.
At present, if the thing is done by the Netherlands, the government has prepared a magnificent infrastructure for cycling. According to a report, people who go to the office in Amsterdam complete the base tricycle. There is a different way in bicycle cities. Apart from this, proper parking and safe bicycle stands are made in place.