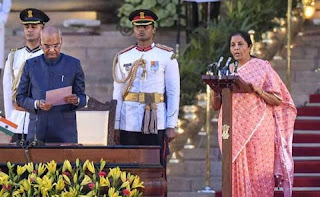 Indira Gandhi also presented the budget on February 28, 1970 in Parliament. This was the first time a woman’s finance minister gave the budget speech for the first time in the country. After a few months, she resigned from the post of Finance Minister on June 27, 1970. Yashwantrao Balwant Rao Chavan was made Finance Minister in her place. Indira Gandhi was the Finance Minister of the country along with the Prime Minister from July 16, 1969 to June 27, 1970.
There are 24 cabinet ministers, 24 minister of state and 9 independent charge ministers in PM Modi’s cabinet. PM Modi has included BJP national president Amit Shah in number two in his Cabinet. He has been made Home Minister. Former Home Minister Rajnath Singh has been made Defense Minister.
These are all the challenges facing Finance Minister Nirmala Sitharaman.
Nirmala Sitharaman will have to work on policies to increase growth in the upcoming budget.
Nirmala Sitharaman has been made the second woman finance minister of the country. PM Modi and the government have lots of expectation from her. In the last few quarters the country’s growth rate has come down. In such a situation, they have to bring policies to increase growth in the coming budget. Banks and NBFCs are struggling with cash and NPAs. Bridging the gap of fiscal deficit and trade deficit should be in their priorities.
The bank has a cash shortage. This is why the Modi government is working on the policy of merger of banks. This will increase the size of the bank, the shortage of cash will be reduced and the NPA can be gradually brought to the track. On the issue of employment the opposition has been consistently hiding the government. In this, creating employment is one of the main challenges of the government. Bringing investment to generate employment should be one of their priorities.
There is a heavy debt burden on all the public sector. In this case, the government is working on the disinvestment plan. Air India has a debt of about Rs 55,000 crore. According to News, the government can do its personalization within 100 days. MSME needs to be strengthened to boost exports. As long as this sector is not strong, export cannot increase.
Modi Government brought Insolvency and Bankruptcy in his first term. Nirmala Sitharaman will be responsible for strengthening this law. Many of the NPA cases have been settled due to these two laws. According to the information, Modi Government can bring new Direct Tax Code.
Indian economy is feeling sluggish for the past few days. A major reason for this is the lack of consumer demand. Apart from this, keeping inflation in control, accelerating demand, attracting investment, increasing exports, reducing fiscal and trade deficit, are the major challenges of Nirmala Sitharaman.