Loading...
USNMix Report: Nokia 2.3 launched with dual rear camera,
will get 4,000 mAh battery.
Tech company HMD Global has launched the Nokia 2.3 (Nokia 2.3) smartphone in Cairo, the capital of Egypt. Users will get strong battery, great display and camera in Nokia’s latest smartphone. Earlier, the company introduced Nokia 8.1 and 5.2 in many countries including India. At the moment, the company has not given official information about the launch of Nokia 2.3 in India. On the other hand, if sources are to be believed, HMD Global will soon launch this phone in the Indian market. So let’s know about the price and specification of Nokia 2.3.
Nokia 2.3 Price
The company has priced this phone at 109 euros (about 8,600 rupees). Customers will be able to buy this device with a green and sand color variant from mid-December (sale can start from 15th to 20th). However, till now the company has not announced the cell date of this phone. At the same time, Nokia 2.3 smartphone can be introduced in India with a budget price tag. 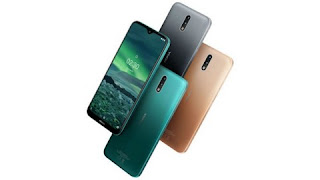 Nokia 2.3 specification
The company has given a 6.2-inch HD Plus display in this phone, which has a resolution of 720×1520 pixels. Also, for better performance, this phone has a Quadcore MediaTek Helio A22 chipset. At the same time, this phone works on Android 9 Pie operating system. Apart from this, users will also get support of 2 GB RAM and 32 GB internal storage in this phone.
Nokia 2.3 Camera
The company has given a dual rear camera setup in the back panel of this phone, which has a 13-megapixel primary sensor and a 2-megapixel depth sensor. Also, users will be able to click a fantastic selfie with the 5 megapixel front camera of this phone.
Nokia 2.3 connectivity and battery
In terms of connectivity, the company has given features like 4G LTE, Wi-Fi, Bluetooth version 5.0, GPS, Micro-USB and 3.5mm headphone jack in this phone. At the same time, this phone has got a battery of 4,000 mAh, which is equipped with a 5 watt fast charging feature.