Loading...
USNMix Report: Nokia 2.3 price leak before launch,
know possible specifications.
Tech company HMD Global is about to launch Nokia 8.2 and Nokia 2.3 on Nokia on December 5. Prior to the launch, many reports of both devices were leaked, in which information about the camera, processor and display was revealed.
Recently, another report has come out about Nokia 2.3, in which its price has been reported. According to the report, the company will price this phone in the budget segment. Also, users are expected to get great features in this phone with a large battery. So let’s know about the potential price and specification of Nokia 2.3. 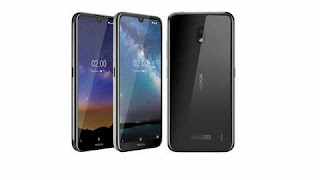 Potential price of Nokia 2.3
According to the report of Nokia PowerUser, the company will keep the price of the upcoming smartphone Nokia 2.3 at 97 Euro (about 8,700 rupees). In addition, this phone will be available with charcoal color option. Even before this phone was spotted on many websites.
Potential specification of Nokia 2.3
According to the leaked report, the company will give a 6.1-inch HD display in this phone. Also, users can get the support of MediaTek chipset and dual SIM in it. Talking about the camera, this phone will have a 16-megapixel sensor in the back panel. Apart from this, HMD will provide features such as Wi-Fi, Bluetooth 5.0, GPS and USB port in terms of global connectivity.
Potential features of Nokia 8.2
Nokia 8.2 will be offered as a flagship-level. The company can keep the price of this phone in the premium segment. According to the media report, users will get support of Qualcomm Snapdragon 730 processor, pop-up selfie camera, 64 megapixel sensor in the rear and 8 GB RAM in Nokia 8.2. At the same time, this device will be available with 5G connectivity.