Nov 25, 2019
USNMix Report: Nokia’s special smartphone will be launched on December 5,
you can get a pop-up selfie camera.
HMD Global is about to launch its most exclusive smartphone 8.2 (Nokia 8.2) in the smartphone market on December 5, after a long time. Also, some time ago the company released a teaser on micro-blogging site Twitter, in which information about the launch date has been received. At the same time, according to the report, users will get a pop-up selfie camera in this phone. Earlier, several reports of Nokia 8.2 were leaked. So let’s know about Nokia 8.2.
Important information related to Nokia 8.2
HMD Global had earlier launched Nokia 8.1 phones in the smartphone market of many countries including India. Users got Qualcomm Snapdragon 730 processor with 8 GB RAM and 256 GB internal storage in this phone. But people did not like this phone of the company much. 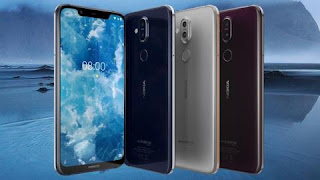 According to media reports, the company will provide a pop-up selfie camera on the front, including the quad camera setup in Nokia 8.2. Also, users can get a 64-megapixel primary camera in the phone. Apart from this, this phone will be the company’s first 5G connectivity device.
Nokia 8.2 Expected Price
If sources are to be believed, HMD Global will keep the price of Nokia phones in the budget segment of Nokia 8.2. At the same time, this phone will give a tough competition to the devices of Xiaomi, Samsung, Vivo and Realme.
Nokia 2.3 and 5.2 specification was leaked
HMD Global introduced Nokia 2.3 and 5.2 ahead of the upcoming smartphone. Let us tell you that the full specification of both these phones was leaked on social media sites before the launch.
Nokia 2.3 and 5.2 features
Users will get strong processor and support of Android Pie in Nokia 2.3. In addition, the company Nokia 5.2 has Bluetooth 5.0, 6.1-inch full HD display and 3,920 mAh battery. Apart from this, support for six GB RAM has also been provided.