Mar 9, 2019
USNMix Report: Ending the unlocking of Android phones from ‘OK Google’.
The technology company is ending the ability to unlock your phone with ‘Voice Match’ and ‘OK Google’ commands in the new updates to your app for the purpose of increasing the security of the Google system.
The search engine is limiting the ‘Voice Match Unlock’ feature to launch the ‘Assistant Interface’ feature rather than unlocking Android devices. The ‘Moto Z’ and ‘Pixel XL’ devices have already finished this feature in Google App’s 9.27 update. 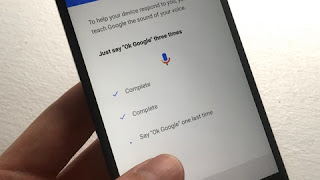 According to the report of ‘Engadget’, other devices with full voice unlocking capabilities will also lose this feature with Google’s 9.31 update. Previously ‘OK Google’ will unlock the screen on the device related app with the command and the question. Google has already launched ‘Pixel 3’ and ‘Pixel 3XL’ and did not include ‘unlock with voice match’ feature in it.
According to the report, in CES 2019, the company had just announced a few days ago that it was removing this feature from all Android devices. This step has been taken with the aim of securing the phone with the second person’s voice similar to the user or the recording of the user’s voice.