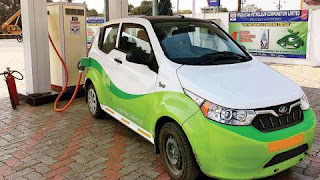 It has been informed by the company that in March 2020, they have also started preparations for carrying 10,000 electric two wheeler and three-wheeler in the country streets. News agency PTI reported that the pilot project of Ola’s electric motorcycle has already started in Gurgaon. Later, the service of Ola will be started to the city in different state. Later the car will be brought down one by one in Delhi, Karnataka, Telangana, Andhra Pradesh, Maharashtra, Gujarat and rest of India.
Anand Shah, co-founder of Ola’s Electric Mobility, said it would take some more time to get the electric car of four wheeler. Prior to this, the two wheeler and three-wheeled electric car service will soon win the hearts of passengers. Already with the help of Mahindra, Mahindra TREO has started preparations to take e-Rickshaw to the streets of India, Ola. Anand Shah believes that the future of the transport system in India will change this electric car. So the company is looking to drive these vehicles as fast as possible.