One Kg of Onion for Free Offer on buying Smartphone

Dec 9, 2019
Loading...
USNMix Report: Shopkeeper pulled out unique offer,
giving one kg of onion for free on buying smartphone.
Since May, onion prices have continued to rise. Also, due to the increased prices of onions, people are now paying more money than before. At present, onion prices have crossed Rs 100 per kg in most states of the country. In this situation, a Tamil Nadu shopkeeper has taken a unique offer to sell smartphones. Under this offer, one kg of onion is being given to customers for free after purchasing the smartphone.
In fact, Satish, who runs a store called STR Mobile in Pattukkottai, has said that 1 kg of onion will be given free to customers who buy mobile from their shop. He has further said that we want to benefit our customers, that is why we have offered this offer. Let me tell you that the price of plazas in Tamil Nadu is Rs 140 per kg at this time.
Shopkeeper Satish got good response from customers
Satish says that since the introduction of this offer, he has received good response from customers. On the other hand, a customer has also said that I needed both smartphone and onion and now I have received both things through this offer. 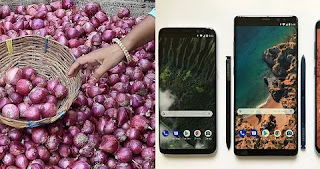 Another customer has said that I was going to buy a phone at another shop, but as soon as I came to know that onion is getting free after purchasing mobile here, I immediately bought the phone from this shop. However, before this no shopkeeper had offered such an offer.
Onion price of Rs 200 per kg in Madurai
Despite efforts by the government, onion prices across the country have set a new record. Onion prices are increasing rapidly day by day. In Madurai, one kg onion is being sold for 200 rupees. In this context, a businessman Murthy says that the customers who used to buy five kilograms of onions earlier, are now buying only one kilogram of onions.
Government took this step
The government has imposed stock limits on traders, so that hoarding can be stopped.
Apart from this, to give relief to the people, the government is selling onions at the rate of Rs 23.40 per kg.
The government has extracted 57,000 tonnes of onions from its buffer stock.