May 16, 2019
Loading...
USNMix Report: OnePlus 7 and OnePlus 7 Pro launched by OnePlus,
know detail of specification and price.
OnePlus 7 and 7 Pro Price and Features:
Chinese smartphone maker OnePlus has launched two new smartphones in the Indian market. The newly launched OnePlus 7 and OnePlus 7 Pro users were waiting for a long time. This time, many features including display, camera and processor in smartphones have been better than the previous version. Earphones of Rs 5,990 are also being provided with phone.
From May 17, both phones will start coming in different color and storage variants. OnePlus 7 price starts from 32,999, the initial cost of One Plus 7 Pro is Rs 48,999. 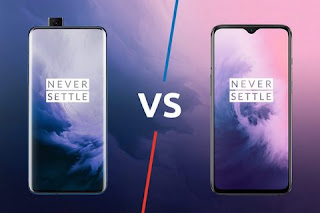 OnePlus 7 Pro Specification
OnePlus 7 Pro is a flagship smartphone. Starting with the price of Rs 48,999, the phone’s base variants have 6 GB RAM and 128 GB of storage. Its 8 GB RAM and 256 GB storage variant will be available at Rs 52,999, while the top variant of the phone, which has 12 GB RAM and 256 GB of storage, is priced at Rs 57,999. The phone has a Qualcomm Snapdragon 855 chipset processor. The 90Hz quad HD + resolution is a covered amyloid display. Triple rear camera setup has been given in the phone. The phone has a 48 megapixel Sony IMX586 camera. A 16-megapixel camera has been provided for selfie enthusiasts. The 4,000 mAh battery has been given in the pro version of the phone.
OnePlus 7 specification
OnePlus 7 is an upgraded version of OnePlus 6T launched last days. Its base variants will be available in 32,999 rupees, with 128 GB of storage in addition to 6 GB RAM. Apart from this, the phone coming in with 8 GB RAM and 256 GB of storage is priced at Rs 37,999. Snapdragon 855 chipset processor is in the phone. This phone has a dual camera setup with a 48 megapixel camera. There is a 3700 mAh battery in the phone. Dual speakers with Dolby Atoms 3D sound in the phone are also given.