Jun 25, 2019
USNMix Report: These smartphones use PM Modi and Amit Shah,
which one do you have?
Who says that just US President Donald Trump has two smartphones and uses Twitter as his typewriter? Several cabinet ministers of the Narendra Modi government are also tech savvy and use Apple Android’s best smartphones to stay active on social media platforms. Many ministers of the Modi Government are tech-savvy and are active on social media. Modi is gadget lover, who uses Apple’s device. After this, Union Home Minister Amit Shah currently uses Brand New Apple XS.
14 Crore followers on Shah’s Twitter
Sources said that when it comes to professional work, Gandhi Nagar MP Amit Shah uses both Facebook and WhatsApp to connect with his team. Shah currently has 1.4 Crore followers on Twitter Union Minister of Petroleum and Natural Gas Dharmendra Pradhan used two smartphones-iPhone and Android based. To stay up to date and monitor all work related to the office, they use a lot of WhatsApp, Facebook and Twitter. The Prime Minister currently has 11 million followers on Twitter. 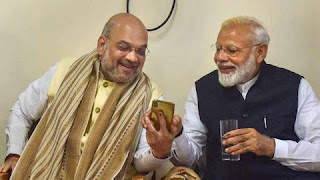 Nitin Gadkari use both Facebook and Twitter
Union Road Transport and Highways Minister Nitin Gadkari is active on both Facebook and Twitter. Sources said that MP from Maharashtra’s Nagpur Lok Sabha constituency gives preference to Twitter and Facebook to monitor daily work of Gadkari office. They constantly use Twitter and Facebook to monitor their team. Gadkari currently has 51.5 lakh followers on Twitter.
Union Finance Minister Nirmala Sitharaman uses Twitter only to connect with Prime Minister Narendra Mod related with concerned government officials and the public to tell about the achievements of his ministry. There are 22.3 lakh followers on Twitter. Minister of State for Steel, Faggan Singh Kulaste, is also using social media a lot and is active on Whatsapp, Facebook and Twitter.
Modi was seen using the phone of the iPhone 6 series during the official visit of China and Dubai in 2018. While accepting his love for gadgets, Modi uses Apple’s best device for security reasons. After Modi’s digital India campaign, there has been a huge jump in the use of smartphones in India. There are 4.82 crore followers on Modi’s Twitter. With all the 11 crore followers on all social media platforms, it is ahead of the 9.6 crore more followers than Donald Trump.