Feb 15, 2019
Loading...
USNMix Report: PM flagged off the Vande Bharat Express,
by 17 you will be able to travel.
Prime Minister Narendra Modi flagged off Indian Railway’s Most Accredited Train-18 (Train 18) or ‘Vande Bharat Express’ on Friday morning. Earlier, PM Modi inspected the fastest train of India. Giving the live updates from New Delhi station, that train will start from February 17 for the common travelers. PM Modi flagged off the train at around 11:25 hrs. 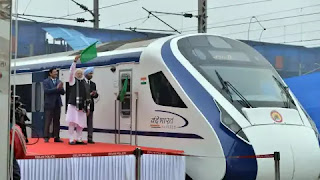 Trains from New Delhi to Varanasi
The train left from New Delhi on Friday will reach Varanasi. There is also a group of journalists with train officers in the train. Prior to leaving the train, the PM inspected inside the train with the railway officials. On this occasion, the PM said that the train has been prepared in the Chennai Integral Coach Factory. While praising Make in India, he said that the railway has given it the right direction.
Paid tribute to the martyrs
At the beginning of the program, the CRPF jawans who were martyred in Pulwama were paid homage after two minutes silent. Addressing the program, Modi said that whosoever is responsible for this attack, he will have to pay a big price.
Characteristics of Vande Bharat Express
Vande Bharat is the fastest moving train in the country without any first engine. The train has been prepared at the cost of Rs 100 crore in Integral Coach Factory in Chennai under Make in India. The door to the train is automatic and it is completely AC train. There are a total of 16 coaches in the train and more than 1100 passengers can travel it at a time. Some parts of the train have been imported from abroad. The train coach has a special seat floated from Spain, which can be rotated to 360 degrees on the need.
The special point of Vande Bharat Express is that in this you will not see the engine like the other trains. The first coach, which has a driving system, has been given 44 seats. There will be 52 seats in the two executive coaches in the middle of the train. Apart from this, arrangements for seating 78 passengers have been arranged in other coaches.