Skip to content
Loading...
USNMix Report: PM Modi released a new coin of 20 coin, 5 and 10.
Prime Minister Modi and Finance Minister Arun Jaitley issued a coin of 20 rupees on Thursday. This coin was released exactly 10 years after the release of the coin of 10 rupees. PM Modi also released a new coin of Rupees 1, 2, 5 and 10 rupees besides this. These coins are special for the visually impaired. They can easily recognize these coins. The series of new coins was released at the residence of Prime Minister’s 7th, Lok Kalyan Marg. On this occasion, Divyang children particularly the vision were called.
Specialty of Rs 20 new coins
According to the information published in the Gazette of India from the Ministry of Finance, the size of the new coin of 20 rupees is 20mm and its weight is 8.54 grams. The inner and outer part of this coin is made of copper, zinc and nickel. There are 12 edges in the new coin. 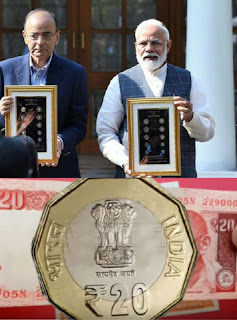 Ashoka Pillar in the front side of the coin
The symbol of the Ashoka pillar on the front side of the new coin of 20 rupees is the lion. Satyamev Jayate has emerged right below this. India is written in Hindi on the right and on the left side India has written in English. On the other side the value is written 20. Apart from this, the symbol of Rupee is also made. Also, grains have been given as proof of being the country’s agricultural head. Under this, 20 rupees are written in Hindi and English.
10 coins is different from design
The design of 10 rupees coins on the edges is not like the new coin of Rs 20. With a new coin of 20 rupees, Prime Minister Narendra Modi has also released a coin of Rs.1, 2, 5 and 10 rupees. Prime Minister Modi said that new coins will prove to be helpful for Divyang.