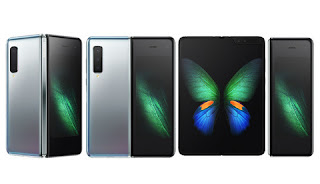 Speaking of Samsung Galaxy Fold’s specification, the 7.3-inch QXGA + Dynamic AMOLED display is available. The cover display is 4.6 inch HD + Super AMOLED. The 7nm 64 bit octa-core processor has been used. Its RAM is 12 GB and memory is 512 GB. Micro SD card can not be used to increase memory in this smartphone.
Triple rear camera – 16 megapixels, 12 megapixels and 12 megapixels have been used. Talk about selfie camera when it is unfolded, the 10 MP and 8MP selfie camera will work. Apart from this, a 10 megapixel selfie camera was given separately which is mounted on the cover display. Talking about the battery, the dual battery has been used, with a total capacity of 4380 mAh.
The company said it was like a ‘luxury phone’. Where three-three apps can be played together on its big screen. As you can see videos of a country trip on YouTube at the same time, you can tell a friend by sending a message about him and at the same time you can also search the internet about travel options.
In this event, the company has launched the Samsung Galaxy S10, Samsung Galaxy S10 + and Samsung Galaxy S10E, the three most popular Samsung Galaxy S10 series smartphones. For the first time in these smartphones, Samsung has used a triple rear camera.