Nov 25, 2019
Loading...
USNMix Report: Realme’s 5G connectivity smartphone
will be launched soon, will get support of dual punch hole display.
For some time, there is a discussion in the country about phones with 5G connectivity. Also, many smartphone manufacturer companies have launched devices with 5G connectivity at global level. In this episode, now China’s smartphone maker Realme is going to introduce its first 5G smartphone X50 (Realme X50) in China in 2020. Talking about the features, users can get support of dual 5G and dual punch hole in this phone.
Due to the lack of 5G connectivity in the country, launching of Realme X50 will take some time. According to media reports, the company will launch Realme X50 next year and after this the phone will be launched in other countries. On the other hand, Qualcomm’s mid or top range processor is expected to be available in this phone. 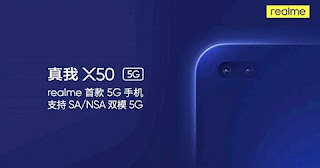 Realme wants to make its presence in the 5G market through this phone. Also big brands like Huawei, Xiaomi and Samsung will get a tough challenge from this phone. Let us tell you that Samsung and Huawei have already launched devices with 5G connection in the market. But these phones are not available for Indian customers. On the other hand, the company’s chief officer had released the teaser of the Realme X50 on the Chinese tech site Weibo, which revealed the information of the dual punch hole and 5G.
30 of Redmi will also be launched
Apart from Reality, Xiaomi’s sub-brand Redmi is about to launch 30 5G phones next year. However, till now the company has not shared official information about the launch and features of Reality X50.
When will 5G phones land in the Indian market
The country’s largest telecom companies have not yet released the 5G network. The network was scheduled to be launched in 2017, but was banned for some reason. New year is coming, but the auction date of this 5G spectrum has not been revealed. On the other hand, 5G devices have been launched in many countries by companies like Samsung, Vivo and Xiaomi. It remains to be seen how long these smartphones can be launched in the Indian smartphone market.