Nov 4, 2019
Loading...
USNMix Report: This recharge pack of Jio will give tough competition to Airtel,
it will get so much data every day.
Currently, there is a war in the Indian telecom market over prepaid plans, in which all telecom companies are launching packs with more features to benefit the people. In this episode, the country’s leading telecom companies Reliance Jio and Bharti Airtel have introduced several recharge plans.
At the same time, both have been giving tough competition to each other for a long time. On the other hand, consumers have also liked the recharge packs of both companies. Today we will tell you about prepaid plans of Rs 500 range of Airtel and Jio, in which you will get great facilities. So let’s know about Jio’s Rs 555 and Airtel’s Rs 558 pack … 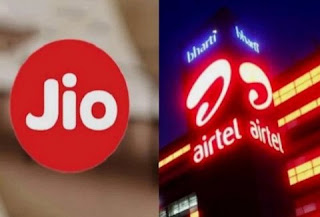 Reliance Jio prepaid plan of Rs 555
Jio has launched this plan in the Indian market with IUC minutes. Consumers will get two GB data per day (total 168 GB data) in this plan. With this, 3,000 IUC minutes will be given for calling on other networks, but unlimited calls have been provided on Jio to Jio.
Apart from this, users will be able to avail 100 SMS. At the same time, the validity of this pack is 84 days. On the other hand, users are getting a discount of Rs 50 on recharging the prepaid plan of Rs 555 from Paytm. But consumers of Jio can take advantage of this offer before November 15.
Bharti Airtel prepaid plan of Rs 558
This prepaid plan of Airtel is one of the popular recharge packs. At the same time, this recharge plan of Airtel has given a tough competition to the plans of companies like Jio and Vodafone. Consumers will get three GB data daily in this prepaid pack. Users will be able to make unlimited calls on any network through this plan. Also, they will not have to pay IUC charge. Apart from this, consumers of Airtel will be able to avail 100 SMS.
Airtel Rs 599 recharge plan
Airtel has also launched a prepaid plan of Rs 599 for Delhi consumers. The company launched this recharge pack in the Indian telecom market in September. Earlier, users from Tamil Nadu and Pondicherry were recharging. Airtel consumers will get two GB data (total 168 GB data) per day in this plan. Along with this, unlimited voice calling, 100 SMS along with FUP limit will also be given. At the same time, the company will also give Bharti X Life Insurance of four lakh rupees to its customers.