Dec 3, 2019
Loading...
USNMix Report: A special app launched for children,
the phone will not open without sending a message to parents.
Nowadays, children or older people are running behind the smartphone. In public places too, people are entangled in their phones instead of seeing the sight. The situation has even become so that people are scrolling the phone instead of walking in the fair. The children are suffering the most from smartphones. Due to the use of more mobiles, the eyes of children are getting worse, many are complaining of pain in the spine and neck. Troubled by these things, a person named Nick Herbert of Britain has launched a special mobile app for children that does not allow children to use the phone without telling parents. Let’s know about this app in detail.
Respond ASAP is the name of this special app
Nick has created an app called Respond ASAP. Through this app, parents can keep an eye on their children and can also know how long the child has been using the smartphone. Actually, this app has a feature that as soon as the child wants to use the phone, first he has to send a message to his parents, only then the smartphone will be unlocked. The special thing about this app is that even if the phone is on silent mode, voice will be sent even after sending the message. The sound of receiving the message will keep coming until the child receiving the message means that the child will not reply to that message. 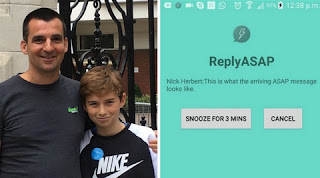 Parents will be able to lock children’s phones
Apart from this, parents can also see on their phone what their child is doing on their smartphone. Also, parents can lock their child’s phone from their mobile at any time. Nick says about this app that many times children use smartphones as headphones. In such a situation, they do not listen even when they make a sound, but if they have Respond ASAP in their phone then they can be monitored. The Respond ASAP app is currently only for Android devices. Soon it will be introduced for iOS.