Skip to content
Loading...
USNMix Report: Galaxy A-Series 2020 will be launched on this day,
you can get strong battery.
Smartphone manufacturer Samsung has released a teaser regarding the latest Galaxy A series (2020), in which the launch date has been revealed. According to the teaser, the company is about to launch the upcoming Galaxy A Series 2020 in Vietnam on December 12.
Earlier, it was reported from the report that Samsung will present this series at the beginning of the new year. But the company has not yet clarified which smartphone can be offered under this series. On the other hand, if sources are to be believed, the Galaxy A51 will be launched in the market. 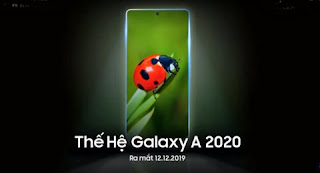 Official teaser of A Series 2020
Samsung Vietnam has posted the teaser of the Galaxy A series on its official YouTube channel. It can be seen in this teaser that the A Series devices have got a strong camera and a punchhole display. At the same time, the look of these smartphones closely resembles the Galaxy Note 10 series.
How many phones of A series 2020 will be launched
For a long time, many reports related to the Galaxy A Series 2020 have been leaked, which have been said to be launched next year. But now the company’s teaser has confirmed that the Galaxy A Series 2020 will knock on the 12th of December. According to media reports, the company will offer around eight smartphones in this series.
A Series 2020 Smartphone
Samsung can introduce the Galaxy A21, Galaxy A31, Galaxy A41, Galaxy A51, Galaxy A61 and Galaxy A71 under the upcoming Galaxy A series.
A Series 2020 Smartphone Information
According to the leaked report, the company will offer 6.5 Super Amoled display, 4,000 mAh battery, triple rear camera setup, Exynos 9611 chipset and 32 megapixel selfie camera in all these devices. At the same time, the information about the real price and specification of these smartphones will be found only after the launching event.