Samsung Galaxy A70 with 32 MP selfie camera launched in India

May 12, 2019
Loading...
USNMix Report: Sale start of Samsung Galaxy A70
with 32-megapixel selfie camera!
If you buy Galaxy A70 from Flipkart, ICICI Bank customers will get special extra discounts of up to Rs 2,000.
After launch in April, Samsung’s new smartphone Galaxy A70 has started selling since early May. The mobile manufacturer of South Korea, which is desperate to catch an Android smartphone market, has launched several smartphones in the last few months. Almost every smartphone launched in recent times has seen commercial success. The pre-booking of this phone was started on April 20. Take a look at this time the Galaxy A70 specification and price … 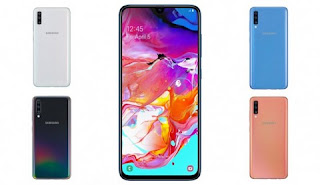 Samsung Galaxy A70 specification and price:
1) 6.7 inches Full HD Super Amoled Display. More than 86 percent of the phone’s screen-to-video ratio This phone has a small display notch. There is an Infinity-U display.
2) 6 GB of RAM and 128 GB internal storage, which can be increased to 512 GB via microSD card.
3) The company’s own OneUI screen will run on Android 9.0 (Pie). With Snapdragon 675 (8 nm) chipsets.
4) 32 megapixel (primary sensor) + 8 megapixel (ultra wide sensor) + 5 megapixel (extensively sensor) triple rear camera setup and 32 megapixel selfie camera.
5) Fingerprint sensor is below the phone’s display. This smartphone can be found in blue, black and white colors.
6) There are 4,500 mAh non-removable batteries on this phone. Includes fast charging facility For connectivity, 4G LTE, Wi-Fi 802.11ac, Bluetooth v5.0, GPS / A-GPS and a USB Type-C port.
Samsung Galaxy A70 price is 28,990 If you buy Galaxy A70 from Flipkart, ICICI Bank customers will get special extra discounts of up to Rs 2,000.