Loading...
USNMix Report: Samsung Galaxy A80 will soon be launched in India,
pop-up rotating camera with exclusive features.
Prior to launch, the Samsung Galaxy A80 will be an exclusive preview in Delhi, Mumbai, Hyderabad, Kolkata and Bangalore on June 8 and 9. Anyone can join the preview program, but before that the registration on the Samsung Member app is required.
Samsung launched Samsung Galaxy A70 smartphone in the Indian market in April. The company is going to launch the Galaxy A80 in the Indian market soon. It was launched in Thailand in May. It is now preparing to launch it in India. An exclusive preview will be held in Delhi, Mumbai, Hyderabad, Kolkata and Bangalore on June 8 and 9 before launch. The program will start in Delhi, Mumbai and Hyderabad at 6 pm on June 8, while the preview program will start in Bangalore and Kolkata at 6 pm on June 9. 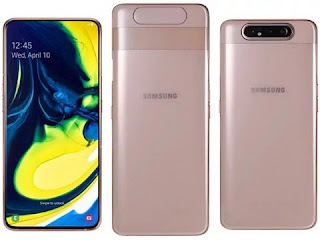 Anyone can join the preview program, but before that the registration on the Samsung Member app is required. According to the report, this smartphone can be between 45 to 50 thousand rupees. The biggest feature of this smartphone is pop-up rotating triple rear camera setup. Plus it has full screen display.
Let’s say, Samsung Galaxy A70 was launched in India in April. Its starting price is 28,990 rupees. The phone has a 6.7 inch full HD + Super AMOLED display. Equipped with the Qualcomm Snapdragon 675 processor, this phone has 128 GB of memory and RAM 6GB. 32MP + 8MP + 5MP triple rear camera setup has been given. Its battery is 4500 mAh.