Loading...
USNMix Report: Information leaked before the launch of Samsung Galaxy A91,
support of Panchhole display.
Korea’s smartphone maker Samsung is soon to launch the latest A Series (2020) at the global level. Devices like Galaxy A51 and Galaxy A 91 can be launched under this series. Recently, a report about the Galaxy A91 smartphone was revealed, in which information about the price, display and camera was revealed. According to the leaked report, people will get a punchhole display and a square shape camera setup (four cameras in the back panel) in this phone. Apart from this, the company will offer this device in select markets like the Galaxy S10 Lite. So let’s know about the possible specifications of the Galaxy A91.
Samsung Galaxy A91 Report
According to the latest leak report, the company will give a punchhole display like the Galaxy S10 in the Galaxy A91. But in the cutout, it can be seen that the design and look of the new model is very similar to the Galaxy Note 10 series. On the other hand, if you look at the leaked photos of the Galaxy S11, its design is quite similar to the Galaxy A91. 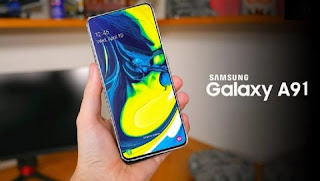 As per media reports, the company has given glossy finish and thin bezels in the S11. However, other reports have stated that the Samsung Galaxy A91 will have a triple rear camera setup and periscope lens. But information about the real price and features of this phone will be found only after launching.
Potential specification of Samsung Galaxy A91
According to the leaked report, the company will offer a 6.7-inch Full HD Plus display in the Galaxy A91. Also, 8 GB RAM can be supported with Qualcomm Snapdragon 855 chipset for better performance. At the same time, this phone will work on Android 10 operating system.
Talking about the camera, users will get a triple rear camera (three cameras) in this device, which will have a 48-megapixel primary sensor, 12-megapixel ultra wide angle lens and a 5-megapixel telephoto lens. In addition, users will be able to click great selfies with an 8-megapixel front camera.
Samsung Galaxy A91 battery and connectivity
In terms of connectivity, the company can offer features like Wi-Fi, Bluetooth 5.0, GPS and USB Type-C port in Galaxy A91. Apart from this, a 4,500 mAh battery will be available, which will be equipped with 45 W fast charging feature.