Skip to content
Loading...
USNMix Report: Samsung to launch
Galaxy M30s and Galaxy A30s very soon, know features.
According to the leaked report, this smartphone will have a 48 megapixel triple rear camera setup. It is equipped with a new Exynos processor, which was not yet in the launched Galaxy devices.
South Korean smartphone maker Samsung has launched several M Series smartphones so far. According to the information, the company will now launch Samsung Galaxy M30s. According to the report of the news agency IANS, this smartphone will be launched next month. At present, there is no information about the price. But, people associated with the industry believe that the Galaxy M series smartphone is a budget phone, so its price may be around Rs 20000. 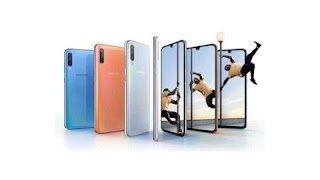 According to the leaked report, this smartphone will have a 48 megapixel triple rear camera setup. It is equipped with a new Exynos processor, which was not yet in the launched Galaxy devices. Let us know, in this range, the company will compete with Xiaomi K20 Pro, Mi A3 and Realme 5 Pro. All these smartphones have a primary sensor of 48 megapixels. This smartphone will have a powerful battery that will support fast charging.
Samsung recently launched the Galaxy A30s in the global market. It is also reported from the sources that this smartphone will also be launched in the Indian market very soon. Its price in the global market is around 22000. It has 4 GB of RAM and internal storage is 128 GB. The screen is 6.4 inches. This display fingerprint sensor feature has been given in this phone. Talking about the camera, there is a triple rear camera setup of 25MP + 8MP + 5MP. The selfie camera is 16 megapixels. Its battery is 4000 mAh which supports 15W charging.