Skip to content
Loading...
USNMix Report: Samsung Galaxy M30s Review:
A great midrange smartphone with a strong battery.
Samsung has recently introduced the Galaxy M30S in India, expanding its M series. Samsung Galaxy M30s has a large 6000 mAh battery. Apart from this, the Samsung Galaxy M30S has three rear cameras of which the primary camera is 48 megapixels. We have used this phone for a few days, so let’s know in review how this smartphone?
Design and display of Samsung Galaxy M30s
This time Samsung has experimented with the camera design of the Galaxy M30s. There are three rear cameras in a rectangular circle. Flash light is also provided with the camera. There is a fingerprint sensor on the rear panel itself and below it is the company’s logo. At the bottom is the Type-C charging port, headphone jack, and speaker grille. The power and volume buttons have been given space on the right side, while the left side has space for the SIM card slot. The front has an Infinity V-Notch display and the Notch has a front camera. The mic and speaker are placed just above the camera. This phone has a 6.4-inch Full HD Plus Super AMOLED display with a brightness of 420 nits. 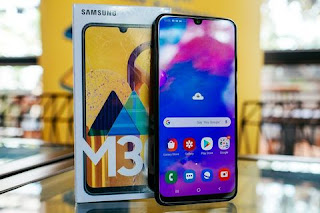 Samsung Galaxy M30s specification
This phone has a 6.4-inch full HD Plus Super AMOLED display with a brightness of 420 nits and a resolution of 1080×2340 pixels. The phone has Samsung’s Octacore Exynos 9611 processor with 6 GB RAM and 128 GB of storage for Jugalbandi. Storage can be increased to 512 GB with the help of a memory card. The phone gets Android Pie 9.0 based One UI. This phone has a strong battery of 6000 mAh which supports fast charging. A 15 W adapter is also available for fast charging.
Samsung Galaxy M30s camera
This phone has a triple rear camera setup with a camera of 48 megapixels f / 2.0 aperture. The second lens is for 5 megapixel depth, while the third lens is 8 megapixel ultra-wide angle that can capture 123 degree area. The front camera is 16 megapixels. Now talk about the performance of the camera, in the light of day you can do good photography with detailing. The mixture of colors in the photo is good, which you can also see in the photos sample below. At the same time, for night photography, you get a separate night mode. 4 x zoom is available with the rear camera.
For video, you also get video stabilization. With the Galaxy M30s you can do Alta HD videography. For videos, you get modes like Super Slow, Slow Motion, Hyperlapse. The live focus is as amazing as before. Talking about selfie, the photo is good. Artificial Intelligence (AI) helps a lot. Portrait mode of selfie also comes clear on the edges i.e. does not blur. Overall, the Galaxy M30s is a great camera phone.
Samsung Galaxy M30s performance
The phone has an Octacore Exynos 9611 processor with 6 GB RAM and 128 GB of storage for Jugalbandi. This processor greatly helps in gaming and multitasking. There is also a game-booster with the phone which optimizes the phone during gaming and does not allow to warm up. During the usage for 10 days, there was no such problem as getting stuck in the phone. One UI with the phone is also good. During the review, we did not face any problem regarding the performance of the phone.
Talking about the battery, in this price range, it is a phone that has a 6000 mAh battery. Once in full charging, ordinary users will get a backup of two days, while those watching a lot of videos and playing games will give a full day backup. The Galaxy M30s is available in two variants which include 4 GB + 64 GB storage and 6 GB + 128 GB storage variants. Their price is Rs 13,999 and Rs 16,999 respectively. So if you are looking for a smartphone that has a good design, big battery, good camera and performance is good, then the Galaxy M30S will not disappoint you.