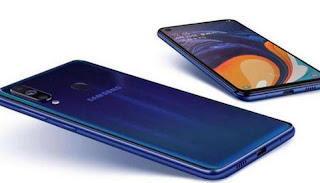 Samsung Galaxy M40 specification and price:
1) 6.3-inch full HD Plus Super Amoled Infinity and (O) display. More than 81 percent of the phone’s screen-to-video ratio.
2) 6GB of RAM + 128GB Internal storage variant can be found in the Galaxy M40.
3) Android 9.0 (Pie) operating system and Snapdragon 675 chipset.
4) It is known that the Galaxy M40 will have a 16 megapixel (primary sensor) + 8 megapixel (ultra wide sensor) + 5 megapixel (direction sensor) triple rear camera setup. The fingerprint sensor is on the rear of the phone.
5) This phone contains 5,000 mAh powerful non-removable battery. With the convenience of fast charging It has been reported that Samsung has given special importance on the battery backup of this phone. 4G LTE, Wi-Fi 802.11ac, Bluetooth v5.0, GPS / A-GPS and a USB Type-C port for connectivity.
6) It is known that Galaxy M40 will be worth 25,000 rupees.