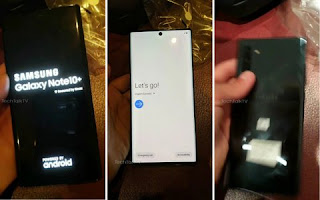 According to the picture which has been leaked, it has been given a punch hole selfie camera. According to the information so far, the Samsung Galaxy Note 10 Series smartphone will not have a physical button. His place would be a prominent centrifugal spot. This smartphone will have triple vertical camera setup. At the moment, there is not even much information about the price. However, the Samsung Galaxy Note 9 was launched in 1000 dollars. Therefore, it is believed that its price will be more than that. It can cost $ 1000.
Galaxy Note 10 AMOLED can come with a covered display. Qualcomm Snapdragon 855 processor. Its battery will be 3400 mAh. In addition, the in-display fingerprint scanner feature can also be. Some reports said in the past that four variants of this can be launched. Two of these variants will support 5G, while 2 variants will not support 5G.