Dec 17, 2019
USNMix Report: Samsung Galaxy Tab S5e Review:
is it really a great tablet?
While companies like Google and Apple are going out of the tablet market, Samsung is continuously offering its tablets in the market. Samsung is quite sure of the tablet market. In this series, Samsung has introduced its new tablet Samsung Galaxy Tab S5e in India a few days ago, which features the main 7040 mAh battery, great display and 4 speakers. The Samsung Galaxy Tab S5e is available in the market in two variants which include Wi-Fi and Wi-Fi + Cellular variants. We have used this new tab of Samsung for a month, so let us know in the review whether this tablet is worth buying.
Samsung Galaxy Tab S5e specification and price:-
Display – 10.5 inch Super AMOLED display, resolution 2560×1600
Processor – Snapdragon 670, 2GHz Octacore
Rear Camera – 13 megapixels
Front Camera – 8 megapixels
Software – Android Pie 9.0 based One UI
Battery – 7040mAh
Body-metal body
Weight – 400 grams
Connectivity – Wi-Fi, 4G LTE, Fingerprints, USB Type-C, Bluetooth 5.0, Keyboard Support
Price- Rs 35,999 / Rs 39,999
Color variant – Gold and Black 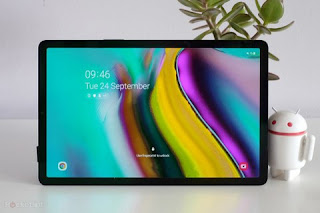 Samsung Galaxy Tab S5e body, display and design
First of all talk about the display, you will get a great display in this Samsung tablet. The special thing is that the company has reduced the bezel very little in this tablet. In such a situation, you get a large display. You are going to enjoy watching videos and playing games. There is no difficulty in this. Talking of video experience on YouTube, you can watch videos at 1080 pixels. The touch of the display is smooth. Now talking about design, the design is good. You get 4 speaker grills on all four sides. Apart from this, the power and volume buttons are given on the right. This tablet is quite thin. In such a situation, you will not have any problem in using this or moving anywhere. To the left of the tab is the magnet connector (pogo pin) to which the keyboard that accompanies it is connected.
The rear camera is provided with a load on the rear. The good thing is that you do not need to use a separate battery for the keyboard. The keyboard is priced at Rs 7,999 but under the offer it can be purchased for Rs 3,500. However, you do not get a mouse with this keyboard. In such a situation, you will have to use a wireless mouse via the Bluetooth connector. Overall you can say that you do not have to worry about the display, design and build quality. One thing that will disappoint you is that you do not get a headphone jack, although the company has provided a separate USB type-C connector for the headphone jack.
Samsung Galaxy Tab S5e performance and Samsung DEX
This tablet has Qualcomm Snapdragon 670 processor which is an octa-core processor. In this case, it is not a high end chipset, but there is no problem with this processor for use of daily. Explain that this is the processor in Google Pixel 3A. It has 64 GB of storage with 4 GB RAM, which you can increase with the help of memory card. We got a Wi-Fi variant for the review. In such a situation, we were not able to do cellular calling but video calling was definitely done through video calling. In this tablet you get Samsung’s OneUI with which we had a great experience.
With the tablet you get Dex support. In such a situation, you can also use this tablet as desktop mode. In Dex Mode, you will get a desktop experience and the screen will be like a desktop screen. The audio quality of this Samsung tablet has to be praised. For great audio experience, the company has supported AKG and Dolby Atom with 4 speakers. This tablet is a gift for those watching more videos.
For security, it has a fingerprint sensor in the face unlock and power button with which there is no problem. If you are typing in English, then desk mode and keyboard are a gift for you, but it is not suitable for Hindi people, because it does not support in-script. If you are typing with Google Input then there is no problem.
Samsung Galaxy Tab S5e’s camera performance and battery backup
As far as the Samsung Galaxy Tabs 5E camera is concerned, the camera is good. As a tablet, the camera of this Samsung tablet will not disappoint you. The camera is better for video calling and if you occasionally do photography with the rear camera, the photo is a good click.
In this tablet, Samsung has given you a big 7040 mAh battery, which has a great performance. This battery also supports fast charging. In about one and a half hours, the battery is full and talking about backup, if you watch some videos and do some work, you will get more than three days of backup, while the backup of the battery also depends on your usage. The gaming experience with the tablet is good and it does not get hot during gaming or heavy use.
Overall, it is a great tablet with a large battery, great display and build quality, great audio, keyboard and support of Dex. With this tablet, Samsung has tried to give the experience of Galaxy Tab S4 at a low price.