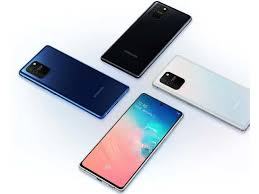 Samsung Galaxy S10 Lite Review: Price
The Samsung Galaxy S10 Lite is priced at Rs 39,999 in India. At this price, 128 GB storage will be available with 8 GB RAM. At the same time, the cost of 512 GB storage variant with 8 GB RAM is Rs 44,999. The Galaxy S10 Lite will be available in Prism White, Prism Black and Prism Blue Color Variants. Talking about connectivity, this phone has a 4500mAh battery which supports super fast charging. Up to two days of backups have been claimed regarding the battery. There will be a 25 watt fast charger with the phone. The phone weighs 186 grams. The phone has an in-display fingerprint sensor.
Samsung Galaxy S10 Lite Review: design and display
The design of this Samsung midrange phone is similar to many of the company’s recently launched smartphones. Simply put, the design of all the phones that Samsung launched in the year 2020 is largely the same. Well, the Galaxy S10 Lite design is good. The phone is compact. It is not easy to use with one hand. Type-C charging and speaker grill are given at the bottom, power and volume buttons at right and SIM card tray at left.
The phone has a triple rear camera setup. The body of the phone is plastic but the finishing is glass-like. The finishing and build quality is superb. You will not get a headphone jack in this phone, but type-C headphones will definitely be found in the box with the phone. The display is as amazing as every time. You will enjoy watching videos and gaming. The colors look real. Autobrightness also works well and the display’s refresh rate is also good.
Samsung Galaxy S10 Lite Review: Camera Performance
The Galaxy S10 Lite has a triple rear camera setup in which the main camera is a 48 megapixel f / 2.0 aperture. The second lens is a 12 megapixel ultra wide angle and the third lens is a 5 megapixel macro lens. For selfie, it has a 32 megapixel front camera. The camera will get super steep optical image stabilization that will work with both photo and video. Gimbal is also being supported with the camera for super steep optical image stabilization. In such a situation, shooting video from a running car will not get a jerk in the video.
As an example, in this, the middle camera of the given triple camera moves during shooting, that is, adjusting itself according to the subject focus. Talking about photo quality, from selfie to night mode is amazing. You can see Knight’s awesome in the photo below. There is no problem with image stabilization. With its help you can do good photography and videography, although the camera is a bit slow. If you click the photo continuously (back to back), you will find the camera slow.
There are no complaints about color and contrast in the photo. After an update, the camera’s performance is better than before. With the camera you also get a live focus video mode. Macro lens is also great. With the camera you get 8x digital zoom. Galaxy S10 Lite’s night mode is better than iqoo 3’s night mode. Overall, for the first time Samsung has launched a good camera in Midrange.
Samsung Galaxy S10 Lite Review: performance
As far as performance is concerned, in this you get the flagship processor Snapdragon 855 processor, which helps in heavy use of the phone. App switching is not a problem. Even when opening multiple apps at once, the phone does not get stuck. The UI is great, many of you may have used it as well. Initially the phone used to be a bit hot during charging, benchmark testing and gaming, but after an update, now there is no problem. It is rated 422708 on the Antutu Benchmark.
The phone does not get hot and hangs even when playing heavy games like Asphalt 9 for a long time. A normal user will get battery life for a day. Fast charging is good. In 45 minutes to 60 minutes, the phone is fully charged. The audio quality is amazing. The phone also supports Dolby Atmos. You do not get wireless charging and power share in this phone.
The fingerprint sensor is in the display. Galaxy S10 Lite’s in-display fingerprint sensor is faster than the old flagship but not as fast and accurate as other companies’ phones. Face unlock is also fine. So overall if you buy Galaxy S10 Lite then you get a flagship phone with brand value. The phone will not disappoint you.