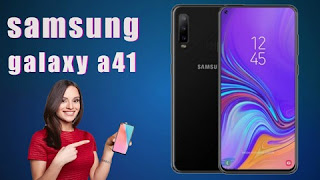 Samsung Galaxy A41 specification
This Samsung phone has a 6.1-inch Full HD Plus Super AMOLED display. Apart from this, it has been given the Octacore processor, whose model and name have not been given by the company. The phone will get 4 GB RAM and 64 GB of storage.
Samsung Galaxy A41 camera
This new Samsung phone has a triple rear camera in which the main camera is 48 megapixel wide angle, the second lens is 8 megapixel ultra wide angle and the third lens is 5 megapixel depth sensor. This phone has a 25-megapixel selfie camera.

Samsung Galaxy A41 battery and connectivity

This phone has a 3500mAh battery which supports 15 Watt fast charging. The phone also has an in-display fingerprint sensor. Apart from this, it has features like Type-C charging, 4G LTE and NFC.