Loading...
USNMix Report: SAMSUNG will launch the Galaxy Note Series’s
two new smartphones.
For the first time Samsung is unveiling two Galaxy Note devices – Galaxy Note 10 and Galaxy Note 10 Plus and S Pen simultaneously on August 7 in New York, which will take performance and productivity to the next level.
At the same time, Apple is about to launch new iPhone in the holiday season. Both of Samsung’s devices will have a front facing camera inside the display. Also, they will have triple real camera. 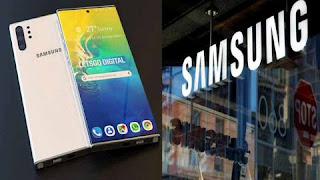 Price can be close to 66 thousand
The Galaxy Note 10 Plus will have a large 4,300 mAh battery, which will support fast charging, while the other device will have a 3,500 mAh battery. The S Pen (Stylish Pen) is likely to have air functions feature, which will make it easier for users to perform cool tricks to take pictures or make power point presentations. It is believed that the initial price of these smartphones can be around US $ 949 i.e. around Rs 66,724.
There is no official information regarding the price yet. This time, Stylish Pen i.e. S Pen will have such a feature, which will enable users to navigate gesture. In the Note 9 released last year, Bluetooth feature was provided in the S Pen, so that users can take pictures even remotely. Keeping in mind the gaming by Samsung, there is a possibility of giving new features in these phones.