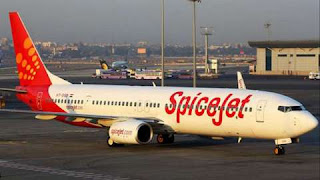 157 people died in the plane crash Let us tell you that 157 people died in the Ethiopian Airlines plane crash in the past. After this, many countries around the world have banned Boeing 737 Max 8. There are a total of 17 Boeing 737 Max 8 aircraft in India, out of which 5 are Jet Airways and 12 Spice jets. SpiceJetOn Tuesday night, the Civil Aviation Ministry said that the DGCA has immediately banned the flight of Boeing 737-Max 8. The flight of these aircraft has been banned for as long as their safety features are not worked out.
This second incident in five months
Aviation Minister said in his tweet that the safety of passengers is included in their priority. Talking to the regulators, airlines and aircraft-making companies around the world, for passengers’ safety, Four Indians were also boarded the Boeing 737 Max 8 aircraft crashed on Sunday near Addis Ababa of Ethiopia. This is the second time in five months when the Boeing 737 Max 8 has been damaged. Earlier this year, the plane of this series of Lion Airlines crashed in Indonesia. More than 180 people died during this period.
Emergency meeting instructions with all airlines
Civil Aviation Minister Suresh Prabhu said that the secretary has been instructed to make an emergency meeting with all the airlines to ensure that the passengers do not have any problems. No adjustments will be made to protect the passengers. Passengers should not have any problem, it is constantly being tried.
/
Apart from India, the UK, France and Germany have so far banned the flight of Boeing 737 Max 8. Turkey’s airline has also announced that it will ban Boeing 737 Max 8 aircraft after some clarity on Wednesday on some issues.