Student of the Year 2: Movie review 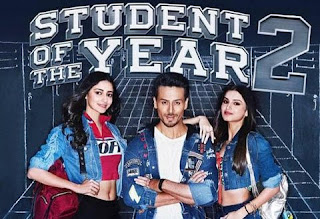 The film is directed by Puneet Malhotra while it is produced by Karan Johar banner Dharma Productions. Tiger Shroff in the film ‘Rohan’, Tara Sutaria ‘Mridula aka Mia’, Aditya Seal ‘Humans’ and Ananya Pandey are seen in the role of ‘Shreya’. Actually, Shreya and the human brother and sister are both rich and rich, as well as having children of St. Teresa’s trustee. The story of the movie is completely based on Rohan, which is from a middle class family, who is successful in getting sports quota admission in a college like High Teaching College in Saint Teresa.
Rohan’s admission in this college is meant to get the love of the girl, whom he loves since childhood and her name is Mridula aka Miya. Actually, Rohan dreams that he wants to see Mridula’s dancer trophy and go abroad to meet her, but when he comes to college, Rohan’s collision is with the man and his sister Shreya, who, as a thorn is in front of in his path.
In order to know how Rohan can succeed in his cause, you have to go to the cinema and watch the whole movie. Talking about the direction of the film, director Puneet Malhotra has left no stone unturned in connecting the film with its part 1. The film’s strong side is its dance and action. Almost all the songs in the film have already been hit. Well, watching these songs on the big screen is also fun.