May 26, 2019
Loading...
USNMix Report: Start the fastest bullet train trial,
know 10 specialties
Work on the Mumbai-Ahmedabad High Speed Bullet Train Project in India is underway. The bullet train project in the country will be completed by 15th August 2022. Japan, which has made a worldwide recognition for high speed bullet train, has begun its trial of a high speed advance train. There is a plan to bring the new model bullet train to Tokyo Olympics. This high speed bullet train set a distance of 360 km per hour (224 miles) during the trial. Information about this was given by operator JR Central.
Designed for most busy routes
The N700S ‘Supreme’ bullet train has been prepared for Japan’s busiest route. This route is expected to run in its coming time. This train is light in weight with the existing bullet train, due to which the consumption of electricity will also be reduced. Also, safety trains in this train are more than before. Train has been prepared keeping in mind the earthquake. The train’s trial began on Friday. It is expected that this train will leave China behind in terms of speed. 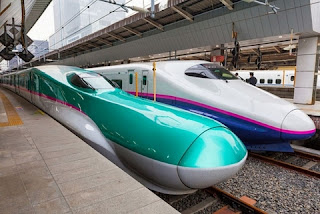 This Train is more than 10 km / h speed of Fuxing Train
Fuxing of China’s fastest train so far this train will speed up 10 kilometers per hour. Trial of train will be done at night between two days of the week between Sendai and Omori station. It will be trials for three years. At the moment, the fastest bullet train is in China, known as the Maglev Bullet Train.
This will be the train’s specialty
– This bullet train is capable of running at speeds of 360 kmph or faster.
– This train is light in weight with the current bullet train, due to which it will be able to run fast.
– Light weight will also reduce the consumption of electricity.
– In this train, such technique has been used so that it can be run even during earthquake.
– Special techniques have been used in the tunnel to deal with the interruption of air.
– This train will run for two more times in a week for more than three years.
– Train trial run will be done between Sandy and Omori cities in north-eastern Japan.
– Air brakes will be on the roof of the train.
– To slow down the speed of the train, there will be magnetic plates along with traditional breaks.
– There will be dampers and air suspension for balance and comfort.