Nov 30, 2019
USNMix Report: Tecno Spark launch with 6000 mAh battery,
price will be Rs 8,499.
Along with being a 2.0 GHz octa-core Helio P22 chipset, it has 4 GB RAM and 64 GB internal storage.
Tecno Mobile, the flagship smartphone brand of Transsion Holdings based in Hongkong, has launched Spark Power, a 6000 MH battery smartphone. Tecno Mobile said on Thursday that the sale of this phone of Rs 8,499 will begin on December 1 on Flipkart. Popular brand series made its debut in the festive season in India this year. Tecno Spark Power will be the latest addition in it.
Arijit Talapatra, CEO of Transsion India said in a statement, “Tecno Spark Power adds another dimension to our product portfolio and this time we worked on long-lasting battery backup for our Indian customers in the ten thousand rupee segment Is. Other smartphones lag far behind in doing this. “ 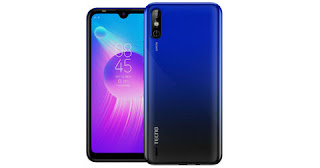 Talpatra said, “The new phone has many new innovations, such as a long-lasting battery, 6.35 inch dot notch AMOLED screen, intelligent triple rear camera kit with quad flash, and advanced HIOS feature. All this will come in ten thousand rupees. Let’s make an all-round champion in the phone. ” This smartphone targets Tech Savvy Millennials in India, for whom this mobile can be the primary screen for daily needs and entertainment. Tecno Mobile claimed that once the phone is charged, 29 hours of video playback, 35 hours of calling, 17 hours of gaming and 200 hours of songs can be heard through the device.
The smartphone will be available in two colors Don Blue and Alpenglo Gold. The device has a 13MP primary rear camera with an F1.85 aperture, a 2MP depth-sensing lens camera, and an 8MP camera with 120-degree ultra-wide lens. It also comes with Google Lens feature to automatically pop up all relevant information for smart identification of objects for easy access to users.
13MP camera has been given for selfie in Spark Power with Dual Flash Innovation and Advanced Artificial Intelligence (AI) technology. In this, beauty modes have been given in six levels. Along with being a 2.0 GHz octa-core Helio P22 chipset, it has 4 GB RAM and 64 GB internal storage. Triple card slot has been given in Tecno Spark Power, through which the user can use dual SIM card and memory card at the same time. It supports cards up to 256 GB.