Skip to content
Loading...
USNMix Report: The founder of Telegram said-
get your private photo public, delete WhatsApp before that.
Telegram founder Pavel Durov has told about a major attack on Facebook-owned app WhatsApp. Pavel Durov has said in one of his statements that all people should delete WhatsApp from their phones. Pavel said that if you do not want your photos, videos and messages to be public then you should not use WhatsApp.
Pavel wrote on his Telegram account, ‘Your private photos, your private chats should become public someday. Before that you should delete WhatsApp from the phone. Facebook has already been a part of the surveillance program before buying WhatsApp. ‘ Please tell that Pavel has 3,35,000 followers on Telegram.
Recently, there has been a ruckus about the privacy of WhatsApp after the NSO group spied around 1,400 people around the world through Pegasus software. About 20 people from India have also fallen victim to it. 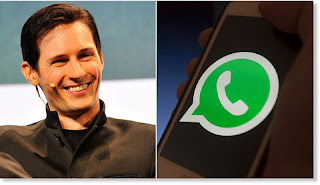 Since the espionage case many people have advised to use Telegram and many people are also using Telegram. Let us know that the number of WhatsApp users in the world is 1.6 billion i.e. 160 crore, while Telegram’s users are 200 million i.e. 200 million. Also read: Indian Army released advisory, set this young man immediately in WhatsApp.

Significantly, after hacking through Pegasus, a report of WhatsApp hacking was also revealed through a video file, after which WhatsApp issued an update, suggesting users to update the app.

Jio Prepaid Tariff Plans hike up to 40% from 6th December