Jun 8, 2020
Loading...
USNMix Report: Learn some interesting things related to the birthday of Tim Berners Lee,
the father of www.
Today is Tim Berners Lee’s birthday. Tim Berners Lee created the World Wide Web, www.
www birthday means birthday of Tim Berners Lee, the father of the World Wide Web. Tim was born on 8 June 1955 in England. Tim was educated at Queens College, Oxford University. During this time he along with his friend hacked many systems, after which his college computer was banned from using. Despite this, Tim had himself produced a computer with television, a Motorola micro-processor and soldering iron. So today we will tell you some such interesting things related to him on the special occasion of Tim’s birthday, which you hardly know about. Let’s know …
Tim Berners Lee’s parent were experts in mathematics, so he also made Tim a math expert. It is said that Tim’s parent explained to him the mathematics of the dining table. 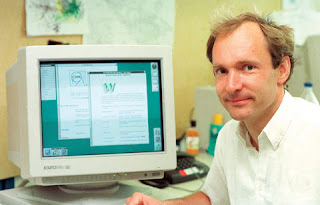 In 1989, Tim Berners Lee wrote a research paper called Information Management – A Proposal. In this, they linked hypertext and the Internet together. This helped improve CERN communication system. But Tim thought that this system could be used all over the world. After this, Tim founded the web association in 1994.
In 1991, Tim Berners Lee launched the first website http://info.cern.ch. On this, complete information about the World Wide Web concept was given, from which any user could start their website. Tin Berners Lee is also credited with writing fundamental of technologies like HTML, URL, HTTP.
In 2004, Tim Berners was knighted by the Queen of Britain. In 2007, Tim was also awarded the Order of Merit. At the same time, Tim Berners name is included in the list of 100 Greatest Scientists of the world.