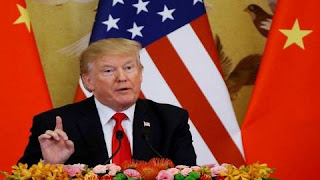 The Ministry said, “It is expected that the US and the Chinese side will work together to solve existing problems through cooperation and consultation.” China said that it is “deeply sorry” of this move of the United States and it must take “necessary counter-measures” for this.

Trump accused of bargaining on Beijing, Here President Donald Trump says that the US and China had reached ‘very close’ to the trade agreement, but Beijing started bargaining again in this regard. At the moment, the world’s two largest economies are not able to reach even around any agreement to end the grueling trade war between them.
Import duty increased to stop China
Trump told reporters on Thursday that this step was necessary to stop China. Trade war is going on between the two countries since heavy imports of trump imported steel and aluminum from China in March last year. This has led to the fear of a global trade war. China’s response has also imposed a charge on US imports.
Trump says the US will have the advantage of $ 120 billion
Trump said, “We were very close to compromising but they started bargaining again. We can not do this. “Later, China’s Vice Premier Liu He held a meeting with US business representative Robert Lighthizer. Trump defended his decision saying that his country could get $ 120 billion in fees in a year, mostly from China. Whether imported or not imposed on China’s import, Trump seems comfortable with both of these conditions.