Trump threatens India to reduce import duty on US Whiskey

Jan 25, 2019
Loading...
USNMix Report: Now Trump threatens India,
said – reduce import duty on US whiskey, before importing my call.
Trump said earlier, there was a 100% import duty on Harley-Davidson motorcycle in India but after two minutes of talks, India reduced it to 50 percent.
Trade war between the US and China is not hidden from anyone, but in a White House program on Thursday, they threatened India. Trump said that no country can harm the US in mutual trade. If that happens then the US will limit trade with that country. Trump gave an example in this regard, describing how he forced India to do his thing. 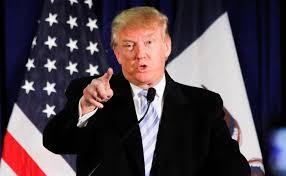 Trump says that his eyes are on the ‘high import duty’ of 150 percent of the American whiskey in India. He said that before India had 100 percent import duty on Harley-Davidson motorcycle, but after two minutes of his talks, India reduced it to 50 percent, which is ‘a fair agreement’.
Trump calls the high import duty imposed on India on the import of Harley-Davidson as “unwarranted”. He had threatened to raise fees on Indian motorcycles imported in the US, after which in February last year, India had imposed the import duty on Harley-Davidson motorcycles imported from the US to 50 percent.
In a program organized on the Reciprocal Trade Act in the White House on Thursday, Trump introduced an example of non-mutual charges in the trade done with different countries on a green board. Trump said, “Just look at the example of the motorcycle, the import duty on this in India was 100 percent, but in just two minutes, I got it 50 percent from it, it is still 50 percent, while in the US, the motorcycle But only 2.4 per cent is charged, but still it is a fair agreement. “
Although Trump has expressed resentment over India’s high fees imposed on American liquor. He said, “India has a very high fee. They charge too much. You see whiskey, India charges 150 percent of it and we do not get anything. “During a conversation with the MPs in the White House, Trump said that the mutual business law is designed to provide US workers with equal and appropriate Will facilitate business at the level.