May 24, 2019
USNMix Report: Twitter Co-Founder Evan Williams praised the Trump,
saying they were the ‘master’ of this platform.
Trump recently acknowledged that the micro-blogging site for them is a different way of ‘communicating with a typewriter’ and ‘communicating in a modern way’. Thereby, things can be seen differently.
A few days after US President Donald Trump’s use of Twitter as his ‘typewriter’, the now co-founder of Micro-blogging site Evan Williams described Trump as the “master” of the platform. In an interview published by CNN Business on Wednesday, Williams said, “What Trump has clearly done with Twitter is very talented, like some others, he is the master of the platform.” 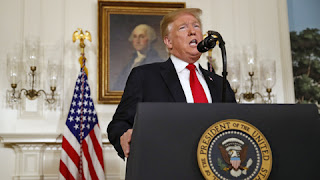 For the controversial statements, war threats and spelling mistakes on their Twitter handle, the infamous Trump recently acknowledged that the micro-blogging site for them is a different way of ‘communicating’ and ‘communicating in a modern way’ . Thereby, things can be seen differently. The report said that Williams argued that the potential negative impact of President’s tweet on the political discourse of the country is “negligible compared to the wider impact of the wider media.”
The statements come in compliance with one of the popular scenes in Silicon Valley, who believe that traditional media outlets have covered the devastating effects of large technology companies on a large scale, while not investigating their own role in creating more polarized societies. Williams said that Twitter is not destructive as a platform compared to Fox News.
Williams was quoted as saying, “The vast majority of voters are not interested in reading and convincing the Trump tweets on Twitter, they are much more confident than the destructive power of Fox News, which is much more powerful than Twitter and much more More destructive. ” Williams founded Twitter with Jack Dorsey in 2007. Later, in 2008, he became CEO of Twitter in place of Dorsey.