Jul 20, 2019
Loading...
USNMix Report: Don’t surprise to look at Twitter,
these 5 changes will appear.
The famous microblogging site Twitter has launched its new design. The news of launching it for the last several months was coming. But now it has been offered on behalf of the microblogging site. Twitter’s new look is an update than before. This design comes with a faster, better, and new color theme. In it you can choose a color theme according to your liking. The company has not given the updated version to everyone in the beginning, slowly – now it is reaching users.
Several steps have been taken to make Twitter faster, easier, and easier than ever. After this change mobile users will now be able to use shortcuts like tablets and desktop users. To tweet, the composite feature can also include photos, GIF, pole and emoji. In the new version, you can customize the account differently. By customizing you can get the Navigation Experience completely. Read more about the five changes made in Twitter. 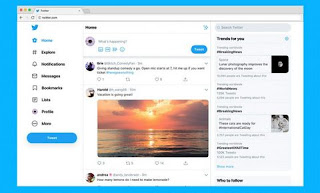 Previously big left bar
In Twitter’s new look the user will get many new features. The new look has already been given a big left bar where the user will get all the necessary sections. This includes notifications, direct messages, etc.
Direct message screen
In the microblogging site, a direct message screen like an inbox is also given. This is a better option than before, as well as you can also reply to your friend’s message.
Different themes
In addition to switching profiles in Twitter’s new look, the company has given support, advance search and other features for more themes. It has dark theme mode, dim and completely blacklight out mode among the users.
home screen
But apart from all this, the most different thing to look for is Twitter’s Home screen.
Top navigation bar
In the new design the top navigation bar has been shifted to the left side bar. This change will notify you first as soon as you login to the account.