Skip to content
Loading...
USNMix Report: Twitter changes logo to black
after protest George Floyd’s death in America.
Twitter blackened its logo, decided in the midst of violent violence in America.
Violence has erupted in many areas in the US following the death of a black man. Violent demonstrations have begun throughout the US following the death of 46-year-old George Floyd in Minnesota. The condition has become so bad that its heat has reached the White House as well. This fight has taken the color of white and black, although this is not the first time that people have taken to the streets on the treatment of blacks in America. This has happened many times before. 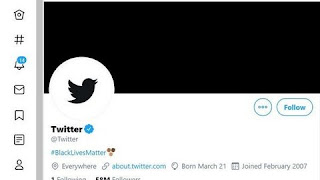 Meanwhile, microblogging site Twitter has removed its blue logo and blackened it. Twitter’s bird was earlier blue which has now turned black. Twitter has also used the #BlackLivesMatter hashtag in the profile along with changing the logo. The cover photo is also completely black. Apart from this, a Twitter account has also been tweeted with the hashtag #BlackLivesMatter.

Racism does not adhere to social distancing.

Amid the already growing fear and uncertainty around the pandemic, this week has again brought attention to something perhaps more pervasive: the long-standing racism and injustices faced by Black and Brown people on a daily basis. 🧵 pic.twitter.com/8zKPlDnacY

Let us know that earlier on the tweet of US President Donald Trump, Twitter had issued a public notice warning that this post glorified violence. Trump’s tweet was about the Minneapolis protests in the United States that surfaced after George Floyd’s death.