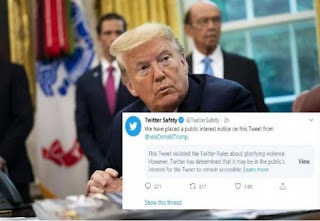 Earlier, on one of Trump’s tweets, Twitter had put a fact check and said that the tweet is misleading. Twitter has stated in a public notice that Trump’s tweet violates Twitter’s policy, although Twitter has not deleted Trump’s tweet but has been hidden by users.
Twitter has said, “We have taken this action in the interest of preventing others from being motivated to commit violent acts, but have maintained the tweet on Twitter as it is important that the public can still see that tweet.”
Twitter has also highlighted the sentence in Trump’s tweet that reads, ‘Any difficulty and we will assume control but when the loot starts, the shooting begins’. Twitter says this clearly reflects the ongoing Minneapolis protests.
Let me tell you that 46-year-old black citizen George Floyrd died in police custody in Minneapolis, USA. Four policemen have also been dismissed in this case. Twitter issued a public notice after Trump tweeted about the same death.