Loading...
USNMix Report: Donald Trump angry with Facebook, Google and Twitter,
and he said – a case file will against all of them.
Trump said, “Look, we should file a case on Google, Facebook and all those who might be fine, right?”
US President Donald Trump has threatened to file a case against companies like Facebook, Google and Twitter saying that these companies are politically favoritism against the Republicans. According to Variety’s reports, giving an interview on Fox Business Network on Wednesday, Trump attacked technology companies, saying they are all Democrats and their services remain in favor of Democrats completely. 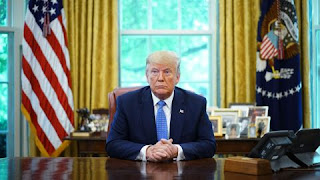 Trump said, “Look, we should file a case on Google, Facebook and all those companies that might be fine, right?” He took the name of Twitter specifically for this work. He said, “What he did with me on Twitter is unreliable.” There are millions of followers, but I will tell you, they have made it very difficult for me to join people (on Twitter) and they have to send me a message and make it difficult Going.”
He attacked Google in the interview saying, “There should be a case for favoritism on Twitter. Now you see Google, hate for Republicans.”