Mar 3, 2019
Loading...
USNMix Report: US President Donald Trump shocks India,
now it will be expensive to export.
There is currently no export tax on Indian goods exported from the US to India.
US President Donald Trump, giving a tremendous blow to India, said that India imposes a lot of tariff on us, while we do not charge any kind of tariff from him. But, now it will not be so. India also has to give tariff to export to the US. He said that while the US exports bikes to India, then it has to pay 100 percent tax on it. This makes the price double. But, we do not impose any kind of tax on the goods exported from India.
Trump said that America is not stupid, so now we will recover Reciprocal Tax from India as well. However, there is no information about how much this tax will be. He said that due to the opposition of the Senate we did not raise the tax yet, but now India will also have taxpayer tax due to high tariff. 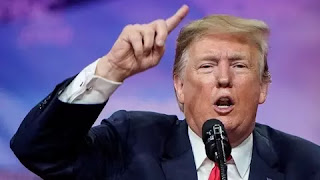 On the last day of the annual meeting of the Conservative Political Action Conference (CPAC), Donald Trump said that the system is not good enough to give 100 percent tax for export and do not charge any kind of charge on the import. Let me say, ‘Make in India’ is an ambitious program of Prime Minister Modi. They are trying their best to promote investment in India and they have dreamed that India should be developed as a manufacturing hub. Unemployment is the biggest problem facing India. The only way to overcome this problem is to develop India as a manufacturing hub. Donald Trump, on the other hand, is asking the businessmen of his country to come back to the United States. They repeatedly reiterate that you come back to America and make this once again great.

India exports about 5.6 billion dollars every year to the US, which is not charged for any kind of tax. India has been taking advantage of this facility since the 1970s. Because of the Generalized System of Preferences (GSP), America’s fixed deficit is very high. Therefore, America is moving forward towards slowing down this program.