Feb 16, 2019
USNMix Report: The Train-18 closed near Tundla,
yesterday it was from New Delhi.
The Indian Railway’s fastest train to Varanasi leaving New Delhi from Varanasi, Bharat Express (Train 18) got breakdown on Saturday morning. This incident took place in Tundla in UP. It is being said that Vande Bharat Express is coming from the animal under the brake down train. Now the train has been stopped in Tundla. Railway officers and journalists traveling in the train were shifted to another train and forwarded for further. It is being told that there are many flaws in the train which will be fixed on Saturday. 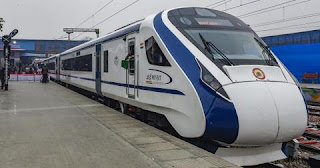 Light cut of 4 coaches of train
Earlier on Friday, Prime Minister Narendra Modi had flagged off Vande Bharat Express from New Delhi Railway Station. At 6am on Friday, the train collided with the animal near the Barhan Railway Station near Tundla. After this the light of 4 coaches of the train was cut off. Railway officials said that there is a safety feature in the train-18, where automatic power disappears in case of any kind of accident or emergency.
Train-18 departs for Delhi
However, the train was later re-indented at about 9 in the morning. After the removal of some capital trains, this train was sent to Hathras with a speed of 100 km per hour at 10.21 hrs. On the other hand, Railway Minister Piyush Goyal said that 100 and Train-18 will be drawn from the Railways side. The Railway Minister described Train-18 as a major achievement of the Railways. He said that the Railways has tendered 30 more trains. Soon 100 more trains will be ordered.
Piyush Goyal also said that this train will also be exported to other countries. A large investment is being made on the infrastructure to run the train at 180 kmph.