May 19, 2019
Loading...
USNMix Report: Virat Kohli, first ever in the social media Cricketer personality,
Dhoni and Tendulkar too behind!
In India, crazy people criticized loudly about both the cricket and the cricketer. The result of this is that the country’s social media users follow politicians and actors as well as the celebrities of the cricket world. So that people follow their clothes and their style so much.
Virat Kohli’s fan following among the world’s cricketers is also tremendous. After scuffle with the bat, Virat Kohli is the first cricketer on social media, whose number of followers is more than 100 million. These followers of Virat include Facebook, Twitter and Instagram on three platfroms. 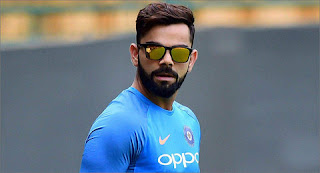 Captain Kohli has 3.71 crore (37.1 million) on Facebook, 2.9 crore on Twitter (29.4 million) and Instagram is 3.35 crore (33.5 million) followers. In this way, the number of total followers on their three platforms crossed 100 million. Cricket is not as popular as football or tennis all over the world, but it is a big deal to have such a large number of followers. Kohli is also ahead from Tendulkar and Dhoni in the case of Followers.
Less than two weeks time to start World Cup
Now that the Cricket World Cup has less than two weeks left to start, in such a way, he has got another achievement on social media. Virat Kohli is the number one batsman in the world, in such a way, the expectations of cricket fans in the World Cup also go up even more. Captains of the Indian cricket team are currently in excellent form in international cricket and the IPL. It will be a matter of time to see how much Team India will excite under his third leadership.
Ronaldo’s Followers are largest on Twitter
Let’s tell you Cristiano Ronaldo has the most 7.7 crore followers on Twitter. After this, football player Neymar Jr. is number one, he has 4.3 crore followers on Twitter. 12.2 crore users follow Ronaldo on Facebook. Messi has 8.9 crore followers after this. Kohli is at the forefront of Followers on Facebook, followed by Sachin Tendulkar with 2.8 crore users on second place.
Ronaldo is also the most sought after follower of the Instagram. Kohli is followed by 3.35 crore users on the Instagram. Apart from this, there are 1.47 crore followers following Sachin Tendulkar. There are 1.3 crore followers of Mr. Cool Mahendra Singh Dhoni. Let’s tell you that Kohli is very active on social media and he also keeps on expressing gratitude to his followers from time to time.