Vivo U20 Smartphone specification and price

Nov 23, 2019
Loading...
USNMix Report: Vivo U20 will be launched in India today,
users will get triple rear camera setup.
Chinese tech company Vivo is about to launch the U20 in India today. Users will get triple rear camera, big battery and great display in this phone. At the same time, the company had released a teaser in association with e-commerce site Flipkart, in which information about some features of the phone was received. Earlier, Vivo launched the U10 in the Indian market. It is expected that the company will keep this phone in the budget segment. So let’s know the possible price and specification of Vivo U20.
Vivo U20 Expected Price
Vivo U20’s launching program will start at 12 noon today. Also, this launching program can be seen on the official YouTube channel of Amazon and the company. Talking about the price, the company will keep the price of this phone between 10,000 to 15,000 rupees. At the same time, customers will be able to buy this phone from Amazon, Flipkart and company stores. 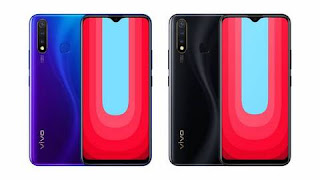 Vivo U20 potential specification
According to media reports, the company will give 6.53 inch full HD display in this phone, which will be equipped with Waterdrop Notch. Also, its screen-to-body ratio can be 90.3 percent. Apart from this, for better performance, this phone will be supported by six GB RAM with Snapdragon 675 chipset. Customers will get 5,000 mAh battery in this phone.
Vivo U20 Camera
According to the teaser, the company will offer a triple rear camera setup in the Vivo U20, which may include a 16-megapixel primary sensor, an 8-megapixel wide-angle lens, and a 2-megapixel depth sensor. On the other hand, customers will be able to click a brilliant selfie with a 16-megapixel front camera.