Skip to content
USNMix Report: Smartphone with the first popup camera launched in India,
Lets go to its features.
The company organized its launch event in Delhi. This smartphone has triple camera setup in its rear for photography.
Smartphone manufacturer Vivo launched a new smartphone Vivo V15 Pro on Wednesday in India. The company had organized its launch event in Delhi. This Vivo phone comes with a 32 megapixel pop-up selfie camera. The company has provided an ultra-full-view display in this phone, which is fully vibrant in Sunlight. 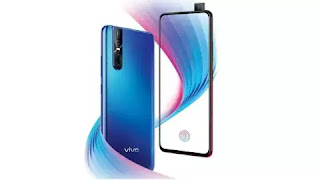 This is special features
The company has given triple camera setup in the rear for photography in the smartphone. The most important thing of VivoV15 Pro is the phone’s in-display fingerprint sensor and popup camera for its security. The company has used the fifth generation in-display fingerprint sensor in it. It has 32 MP Selfie Camera. Triple camera setup is provided in the back panel, where the main camera is of 48 MP. Its secondary camera is 8 MP and the third camera is of 5 MP. The inbuilt storage of Vivo V15 Pro is 128 GB and its memory can be increased to 256 GB via card slot. This phone has a 6.39-inch full-HD + Super AMOLED ultra-fullview display. In addition, this phone is powered by Qualcomm Snapdragon 675 processor.
Vivo V15 Pro Price
The company has launched Vivo V15 Pro in India for Rs 28,990. Let us know that the price is of 6 GB RAM and variants with 128 GB of storage. The smartphone will be found in Topaz Blue and Ruby Red colors. Giving details, the company said that the sale of the phone will start on March 6 from Amazon India, Flipkart, Paytm Mall, Snapdeal and Vivo India. The company has informed that customers can make pre-order booking of smartphones from today.