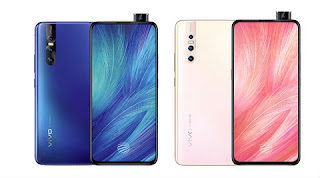 Vivo X27 specification
It is a dual sim smartphone with two variants. It works on Android 9.0 Pie. Its display is 6.39 inches full HD, which has a resolution of 1080×2340 pixels and aspect ratio 19.5: 9. Talking about the processor, hexa-core qualucomm snapdragon 710 SoC has been used. RAM is 8 GB which comes with two variants – 128 GB internal memory and 256 GB internal memory.
Triple rear camera is given with flash. The primary sensor is 48 megapixels. It has 13 megapixels and 5 megapixel cameras. A 16-megapixel pop-up selfie camera has been given. The phone’s battery is 4000mAh. 256 GB variants also support flash charging technology.
Vivo X27 Pro specification
Its display is 6.7 inches, its aspect ratio is 20.5: 9. It works on the Octa-Core Snapdragon 710 SoC processor. There is also a trials rear camera in it. The primary rear camera is 48 megapixels and the selfie camera is 32 megapixels. Its battery is 4000mAh.