Dec 3, 2019
USNMix Report: Vivo Y9s launched at global level,
will get diamond shaped quad rear camera setup.
Smartphone manufacturer Vivo has launched the latest smartphone Y9s (Vivo Y9s) in China. People will get diamond shaped camera setup, strong processor and big display in this phone. Earlier, the company introduced Vivo V17 smartphone in Russia. However, Vivo has not shared official information regarding the launch of the Y9s smartphone in India. So let’s know about the price and specification of Vivo Y9S.
Vivo Y9s Price
The company has priced the variant of this phone with 8 GB RAM and 128 GB internal storage at 1,998 Chinese yuan (about 20,400 rupees). At the same time, Chinese customers will be able to buy this phone from December 6. 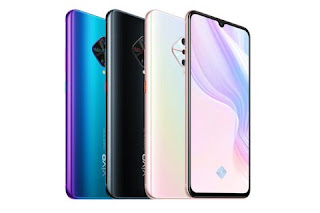 Vivo Y9s Specification
The company has given a 6.38 inch Full HD Plus display in this phone, which has a resolution of 1080×2340 pixels. Also, Qualcomm Snapdragon 665 chipset has been given for better performance. At the same time, this phone works on Android 9 Pie operating system.
Vivo Y9s Camera
Vivo has given a diamond shaped rear quad camera setup in the back panel of this phone, which has 48 megapixel primary sensor, 8 megapixel ultra wide sensor, 2 megapixel depth sensor and 2 megapixel macro sensor. Along with this, users will be able to click great selfies with this phone’s 32 megapixel front camera.
Vivo Y9s Battery and Connectivity
The company has given features such as Wi-Fi, GPS, Bluetooth 5.0, headphone jack and USB port Type-C in terms of connectivity in this phone. Apart from this, users will get 4,500 mAh battery, which is equipped with 18 W dual engine fast charging feature.