Whatsapp account may be deactivated forever if you use substitute Whatsapp

Mar 22, 2019
Loading...
USNMix Report: Your Whatsapp will be closed forever,
check that this mistake will be heavy.
Instant messaging is essential news for millions of users who use Whatsapp. If you also use Whatsapp substitute, that is, the second WhatsApp then get alert.
Actually, the use of Whatsapp cloaked app is growing rapidly. In the last few days, there has been a huge increase in the number of users who use fake Whatsapp. Whatsapp said while issuing warnings to users, stop using these apps. Whatsapp has said to the users that they will switch their accounts to the real Whatsapp as soon as possible. If a user does not do this then his account can be banned forever.
Do not run on these two apps
According to report, Whatsapp has found in its research that many of its users are using third party apps that are similar to Whatsapp. There are two such apps in such a way that the use has increased rapidly. These include GB Whatsapp and Whatsapp Plus. Whatsapp has asked its users to immediately stop using this app. Whatsapp has said is that they immediately shift to the original whatsapp. 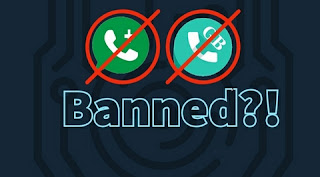 This will know the difference between real-fake
Whatsapp has given its information in its Frequently Asked Questions (FAQ) section. If the user’s account is typing ‘Temporarily banned’, then it means the user is not using real and updated Whatsapp. Original version has been compromised and its cloned version has been created. Third party apps violate the laws of whatsapp and whatsapps do not support such an app. They also risk your data to be stolen.
Do not forget to take a chat back
Whatsapp has also explained the way to switch from these apps. Whatsapp has said is that if you are using such a third party app, do not forget to back up the chat before switching to the official app. This will reflect in the chat history official app like before.
Switch to the right whatsapp like this
To switch now, first you see the name of the app by going to More Options> Settings> Help> App Info. Follow the instructions if this name is Whatsapp Plus or GB Whatsapp. Before downloading official Whatsapp, definitely save chat history.
Follow these steps
– Wait for your bay period to switch from GB Whatsapp to switch to the official app.
– The timer will show how long the bane is for.
– Now click on More options> Chats> Back up chats in GB Whatsapp.
– Then go to the storage and files from the phone settings. Find and select the GB Whatsapp folder here.
– Change the name of this folder from ‘GB Whatsapp’ to ‘Whatsapp’
– Now download and install official Whatsapp by visiting Playstore.
– Verify your GB Whatsapp app. Backup Found on screen
Click Restore> Next.
– All the chats in your account will look like before and you will be able to use official Whatsapp.
How to switch to Whatsapp +
– If your phone has Whatsapp Plus and your chat history is already being saved, it will automatically transfer to official Whatsapp.
– Go to the Play Store and download official Whatsapp and verify the phone number.
– After this, you will be able to use official whatsapp.
Whatsapp is banning users who are using similar third party apps. In this case, WABetaInfo also advised users to switch to Official Whatsapp.