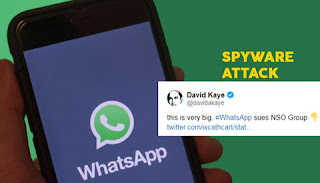 WhatsApp-owned Facebook took legal action against the Israeli cyber security firm NSO this week. Facebook reported that NSO used WhatsApp’s servers to spread malicious malware to users in around 5 countries in 20 countries. Users of the malware attack are each dealing with various state-related security issues. The list of affected users includes journalists, diplomats, human rights activists and top bureaucrats.
WhatsApp authorities contacted users with spyware before they filed a lawsuit against an Israeli company called NSO. The whole thing is clearly communicated to them. According to WhatsApp, this spyware monitors certain users’ phones for several days earlier this year. Monitoring users’ messages, call lists and even passwords is monitored. In April, surveillance was carried out on journalists and human rights activists for about two weeks. According to a message from WhatsApp, the affected users were informed that an attempt to spread such malware was stopped in May this year. Your number is most likely infected with malware. We want you to keep your information secure.
This spyware, called Pegasus, enters the user’s phone during the video call. This spyware is installed on the phone even if the phone is not received.
However, NSO has denied all of Facebook’s allegations. The organization said, “We deny all allegations and will fight against it. Our technology is not designed to be used against human rights activists or journalists.”